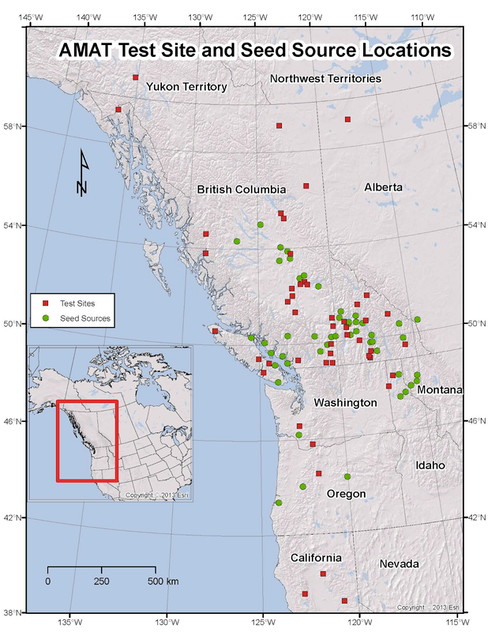 ​Summary
The Assisted Migration Adaptation Trial (AMAT) is a large scale, ongoing long-term climate change research study which aims to provide a better understanding of the climatic and latitudinal tolerances of forests in British Columbia.

Climate change is having considerable effects on Canada’s forests. Recent mild winters have allowed destructive events to take place such as the mountain pine beetle and fungal infection outbreaks in BC which have altered forest composition, structure and health as well as caused declines in various species throughout the province. This is creating considerable challenges for the forestry sector in B.C. These concerns have fueled conversation among researchers and policymakers about the role of adaptation and proactive management. This project involves intervening in ecosystems which are undergoing rapid change in order to improve the future seedlots and increase resilience, growth and wood quality in BC. Selected populations of British Columbia’s 16 commercial tree species will be planted in 48 test sites from Northern BC to southern Oregon, to better understand their climatic tolerance.

The nature of the selection criteria requires a large study range. Due to this scale, BC and neighbouring study states were divided into 48 climate zones, categorized by latitudinal and climatic variables. One test site per zone was prescribed, ending up with 48 seedlots. The trial aims to identify the species and seed sources that will be best adapted to future climates of planting sites, so there will be successful trees in the future when temperatures may be 3 or 4 degrees warmer.

Ecological Geneology
To understand how assisted migration could be incorporated into BC’s seed transfer system it is important to understand BC’s framework and policies of forest management and current seed transfer system. The Chief Forester Standards for Seed Use regulates the collection, registration, storage, testing and transfer of seeds (O’Neill and Ukrainetz, 2009). The seed transfer standards uses a geography-based system including longitude, latitude, elevation, biogeoclimatic zones and seed zones and up until recently, BC’s system of seed transfer had little comprehensive or effective incorporation of assisted migration (O’Neill and Ukrainetz, 2009). The BC forestry sector has recognized the changes occuring in the provinces forests and the need to adapt to these changing species ranges in order to sustain the ecosystem services that BC’s forests provide. The new seed transfer system which incorporates climate modelling will reduce maladaptation, increase seed deployability and allow for assisted migration (O’Neill and Ukrainetz, 2009).

This project has a complicated interplay of ecological and sociocultural processes as it effects not only the immediate biological ecosystems but also the animals and people who interact within these ecosystems. The research on this trial demonstrates that this project is primarily focused on instrumental value and lacks consideration for broader ecosystem functions that are critical to the integrity of the forest ecosystem. The focus on sustaining economic timber outputs for the future carries a complex dynamic of the underlying values, beliefs and goals that drive BC’s broader environmental management system. 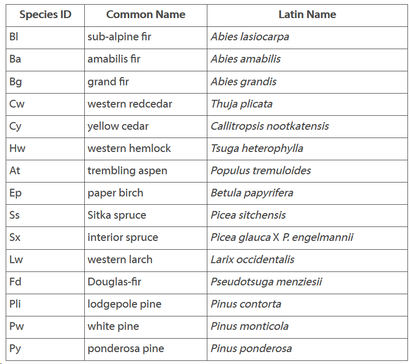 Present tense
Surface temperature is projected to rise over the 21st century under all assessed emission scenarios. It is very likely that high temperature periods will occur more often and last longer, and that extreme precipitation events will become more intense and frequent in many regions, as well as decreasing over others (IPCC, 2013). When seedlot trees are harvested 60 to 80 years after they are planted, the climate could be 3 or 4 degrees warmer than when the seedlings were planted, exposing the trees to maladaptation and health risks (AMAT, n.d). Climate change inserts a new dimension into seedlot selection because the best adapted seedlots for a site will likely change during the rotation (O’Neill et al., 2013). This comparison between test sites and warming levels of ecoregions with climate change can be seen in the images below. At each site there were temperature sensors and data loggers implemented which are capable of measuring precipitation and sensing hourly temperature (O’Neill et al., 2013). These climatology data are being downloaded annually, and biologically meaningful climate variables will be derived from the monthly temperature and precipitation data (O’Neill et al., 2013). See images for a comparison of the seedlot map and future warming regions in B.C.

The hydrological and biophysical range of British Columbia is vast. Regions of the south coast have a mild climate year-round. Summers on the coast are warm, with daytime temperatures around 20°C. British Columbia’s coastal regions have the mildest winters in all of Canada, and temperatures rarely drop below freezing. The interior and central regions have hotter summers, with temperatures in July often reaching 30°C or more. Interior winters are colder and snowier than in coastal regions. For the northern region of the province, winters are long and cold with lots of snow, and summers are short. Regions of north coast are characterized by a lot of rain in the spring, summer and fall, and the winters are cold (Government of British Columbia, 2019). Regardless of which future climate projection is most accurate, land managers will remain interested in understanding optimal growth regions to properly manage the diversity of ecosystems and ecosystem services as they change through time.

The seed source sites and the test sites fall across multiple different Biogeoclimatic Ecosystem Classification (BEC) zones. The current BEC database and classification provides immense value as a baseline ecological condition to assess the effects of climate change (Forest Service B.C., 2019). Therefore, the associated BEC classification system of ecosystems around the seedlot sites will remain a relatively accurate baseline comparison for at least a couple decades until further climate projections are performed, and associated classifications can be adjusted then (Forest Service B.C., 2019). For now, comparison of the current AMAT test sites against current BEC regions will function to determine optimal growth areas, as well as their associated species and habitats with the sites. In addition, the impacts of climate change related to disease and insects is recent and the knowledge gaps are large. Acquiring a better understanding of these processes can allow forest managers to better match tree species with site conditions and take advantage of locations where the impacts of climate change may be neutral or positive.

Planting of the sites occurred over 4 years (12 sites per year), beginning in spring 2009, with establishment in 2012 and growth assessments (height, diameter, survival rate, overall wood quality) every 5 years at age 5 (O’Neill et al., 2013). Productivity of each breeding population will be described as a function of the climate and latitude of the test sites with site weather recorded at each location to refine the climate based seed transfer system (O’Neill et al., 2013).

In terms of indicators, twelve test sites will be planted each year for four years, therefore each monitoring indicator will repeat annually for four years (O’Neill et al., 2013). Spatially explicit estimates of rotation-age volume will occur in each seedlot. These rotation-age values, related to climate regression analysis, were used to determine climate/latitude based productivity response surfaces with future climates, thereby allowing us to calculate rotation-age volume of each seedlot, with the most productive seedlots identified for each cell (O’Neill et al., 2013). Maps will be developed to demonstrate this productivity to identify the most effective seedlots. Traits that provide optimal results will be used to select future acceptable and non-acceptable seedlot zones (O’Neill et al., 2013). 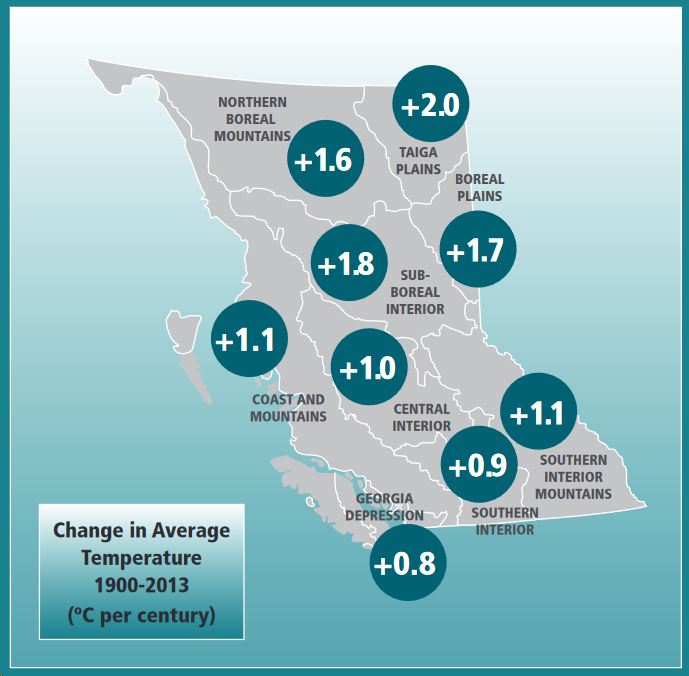 Future trajectories
Assisted migration has multiple ecological goals to aim for, such as conserving genetic diversity, lessening the risk of extinction, supporting ecosystem functions, and having sustainable species for resource extraction (Schwartz et. al 2012). This trial is occurring to secure future ecosystem services but is also evolving to secure the conservation of environments. There are multiple factors that need to be considered when determining the effectiveness and future successes of assisted migration such as ethics, legal policies, and ecological questions (Schwartz et. al 2012).
The AMAT is run by the government of BC and is taking place on crown land, and private land in both British Columbia and parts of the United States, as both US forest services as well as Canadian and American companies have taken part in this trial making this quite complex. Since this is such a large trial site, legal framework and policy play an important role in many aspects such as resource management policies. In order for assisted migration to be successful and persist into the future, the legal framework and policies must be able to prohibit any activities that are not proper, while incorporating the expansion of ranges and the willingness to adapt to new or additional information.
In general, there are some concerns and unknowns about assisted migration, another concerning aspect is that the AMAT trial is aimed at the continuation for the forestry sector mainly for economic gain, focusing on trees for their instrumental value, and while there is a small conservation focus, we believe that there should be a higher focus on the conservation of species for their intrinsic value not their instrumental value alone. This does exist within the trial, such as an example of the Whitebark pine tree in BC that is being planted not for economic purposes. This tree is expected to lose its habitat due to climate change, however parts of BC are, and will be climatically suitable for this tree species in the future. The Whitebark pine is doing well in these conditions. This demonstrates that in the future this is how assisted migration could potentially move forward, keeping in mind our need for the forestry sector but also to conserve and restore other tree species at risk for their intrinsic value.
Along with assisted migration comes it difficult questions, realizing that there are both positive and negative aspects to this work. On the positive side, we have a responsibility to ensure the conservation of species so they do not go extinct (Schwartz et. al 2012). However, we also have a responsibility to not increase the threat of species going extinct, which assisted migration could potentially do if the species at risk do not adapt to the new environment (Schwartz et. al 2012). Trying to bring balance to both sides of this ethical debate is the challenge, but it is these decisions that are going to influence the type of world that our future generations will be handed.
References
Assisted Migration Adaptation Trial. [Web page]. (N.d.). Retrieved from https://www2.gov.bc.ca/gov/content/industry/forestry/managing-our-forest-resources/tree-seed/forest-genetics/seed-transfer-climate-change/assisted-migration-adaptation-trial