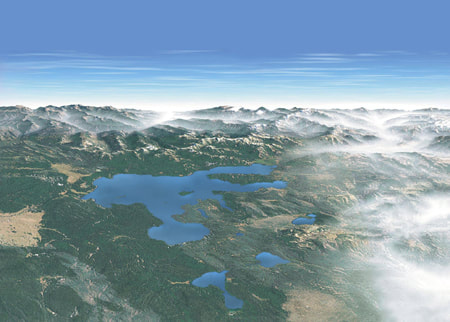 Figure 2. Yellowstone Lake, and (left to right) Shoshone Lake, Lewis Lake, Heart Lake in Yellowstone National Park. Retrieved from Mary Donahue (n.d.).
​Yellowstone National Park’s aquatic systems have undergone numerous alterations since the park’s inception in 1872. The fishless waters were stocked with non-native trout species to increase opportunities for recreational fishing. Additionally, visitors have unintentionally introduced other aquatic invasive species, including non-native snails and a parasite. In the following decades, awareness of the negative impacts of these invasive species arose, and mitigative measures were implemented. Presently, efforts continue to save the native Yellowstone cutthroat trout, which is struggling due to competition and hybridization with the invasive trout species. Impacts from the loss of native trout have already spread beyond Yellowstone’s waterways, affecting semi-aquatic species, such as river otters and waterfowl as well as terrestrial species, including grizzly bears and black bears. Yellowstone National Park’s aquatic systems are susceptible to climate change, which will act as another challenge in the efforts to control the invasive species. With persistent, ongoing intervention, it is possible to decrease the spread of invasive trout species and restore the Yellowstone cutthroat trout populations to their historic numbers.
Genealogy
​​Additional threats to native fish species include Myxobolus cerebralis, a European parasite which causes whirling disease, and two snail species: New Zealand mud snails (Potamopyrgus antipodarum), and Red-rimmed melania (Melanoides tuberculatus). Myxobolus cerebralis feeds on fish cartilage, causing infection which can result in a blackened tail and skeletal deformities. The deformities cause the fish to swim in a whirling pattern, giving rise to the name “whirling disease”. The parasite was first detected in Yellowstone in 1998 and is presumed to have arrived in the US in frozen fish products from Europe. While lake trout and Arctic grayling are immune to the disease and brown trout are resistant, cutthroat trout have no defense mechanism to ward off the parasite (National Park Service, 2017b).

​New Zealand mud snails and Red-rimmed melania pose an indirect effect on native fish species. These snails consume a large quantity of algae, making it unavailable to invertebrates which are the main food source of young trout and several bird species. The mud snails were first detected in 1994 and the melania were only discovered in 2009. It is likely they were introduced in the 1930s as part of the aquarium trade (National Park Service, 2017a).
Present Conditions
​Yellowstone cutthroat trout are a keystone species in Yellowstone National Park, as four mammal species and 16 bird species consume them (Syslo, 2015). Their decline caused major cascading effects throughout the ecosystem (Figure 6), extending to land-dwelling organisms such as black bears (Ursus americanus) and grizzly bears (Ursus arctos). In the early 1950s, multiple bear species within Yellowstone relied heavily on tributaries that contained cutthroat trout during the spawning seasons. Studies compared estimates from 1997 to the number of bears visiting spawning streams in recent years, and noted a decrease of 63% (Koel, et al., 2017). To supplement their diet, the grizzlies and black bears increased predation on elk calves (Koel, et al., 2017). Some species, however, are not opportunistic feeders, and face much larger impacts, such as the river otter (Lontra canadensis). River otters are restricted to specific areas as they lack mobility and are unable to switch from a fish-based diet (Crait & Ben-David, 2006). Otters were required to supplement their diets with less nutritive alternatives, such as non-native longnose suckers (Catostomus catostomus) and amphibians. Although estimates of otter abundance do not exist prior to the 2000s, many researchers suggest their populations have declined in relation to the cutthroat trout (Koel, et al., 2017).
​The social response to these events has be vast. A nonprofit program created by locals called “Save the Yellowstone Cutthroat trout” (Yellowstone Forever, n.d.), aims to preserve native fish populations in Yellowstone. A number of management strategies have been integrated based on expert scientific panel reviews, to ensure a decline in non-native fish species and an increase in cutthroat trout populations. These actions mainly involve lake trout suppression netting, which uses specialty nets to target the deeper water where lake trout reside. Furthermore, the release of native fish species is still required by park regulations, and 99.9% of them are reported released (National Park Service, 2010). Alongside trying to reduce non-native species, management strategies such as the Native Fish Conservation Plan have been designed in order to increase cutthroat trout populations. The plan consists of recovering Yellowstone cutthroat trout abundance to that documented before non-native invasion, restoring genetically pure cutthroat trout, and maintaining access to historical spawning tributaries for native fish (Koel, et al. 2015).
Future Trajectory
The introduction of non-native species has not only changed the biological trajectory of Yellowstone National Park, but has also shifted human values from recreation to conservation. Approximately 50,000 of the park’s four million visitors purchase a fishing licence each year (National Park Service, 2018), and learn to distinguish between the non-native species which they can keep and the native species which must be released. Furthermore, the park has instituted a conservation plan which relies on volunteer angler reports to estimate the number of cutthroat trout and non-native trout in the lakes (National Park Service, 2015). The conservation plan is supported by the “Save the Yellowstone Cutthroat trout” organization (Yellowstone Forever, n.d.) and proposes practical solutions to reduce the invasive trout populations.
​Climate change is also likely to alter the trajectory of the park. Recent trends in climate models show that temperature rise and bark beetle infestation are increasing the fire return interval, which increases the likelihood of drought conditions in the growing season (Romme & Turner, 2015). The number of fires has also increased from human influences such as campfires, vehicles, and cigarettes in the last decade (Yellowstone Center for Resources, 2013). Fire stressors from human intervention are more likely to burn during low-moisture summers, which is concerning considering drought conditions in the park are increasing (Yellowstone Center for Resources, 2013). In the early 2000s, Yellowstone experienced several years of drought which resulted in low lake levels and reduced connection between water bodies. As a result, cutthroat trout juveniles were prevented from travelling to their winter habitat in Yellowstone Lake (Koel, et al., 2017). Furthermore, stream temperatures are predicted to increase by 1.4-3.2°F by 2050 (Al-Chokhachy et al. 2013). This increase is predicted to decrease cutthroat populations by 26%, as well as support the reproduction of non-native fish species (Wenger et al. 2011).
​In our opinion, Yellowstone National Park’s waterways are a designed ecosystem. The introduction of non-native fish to increase fishing opportunities caused a cascading effect on surrounding terrestrial and aquatic species such as bears, river otters, and birds of prey. As such, the ecosystem was designed for human benefit, rather than to protect or enhance biodiversity. In addition, we argue that the ecosystem is not novel because management efforts are set to reestablish the park’s cutthroat trout population, and therefore restore it to a natural baseline. The introduction of non-native fish may have had more influence on the park than the reintroduction of wolves, as the lack of cutthroat trout caused bears to heavily prey on elk populations and slow the growth of their migratory herds (Goldfarb, 2014). However, cutthroat trout populations are set to be restored with continued management, and this outcome will likely reverse the trophic cascading effects which have occurred (Bigelow, et al., 2017).

Goldfarb, B. (2014, August 19). The Battle to Save Yellowstone from Invasive Fish. Scientific American. Retrieved from https://www.scientificamerican.com/article/the-battle-to-save-yellowstone-from-invasive-fish-slide-show/