Ecological Genealogy
Present socio-ecological characteristics
​The interruption of traditional management by the Coast Salish First Peoples on Vancouver Island has led to the continued replacement of Garry oak savannahs by Douglas fir forest, and ongoing species invasion (Dunwiddie & Bakker, 2011). The greatest threats to the remaining Garry oak ecosystems are continued habitat degradation and fragmentation, climate changes and the invasion of competitive species (Dunwiddie & Bakker, 2011). Although many management strategies for the Garry oak savannahs have focussed on these threats, there has been little discussion of the effects of native species, notably the common snowberry (Symphoricarpos albus), that have begun to outcompete other native species that are at risk.

Being very adaptable to different conditions, S. albus can be found in forests, clearings, and rocky slopes in dry to moist conditions (“Common Snowberry, Symphoricarpos albus,” 2017). S. albus spreads by suckering or by seed transportation via bird consumption (“GOERT 2019). Between 119,045 and 249,120 seeds are produced per kilogram of vegetative growth (“GOERT 2019). As a result S. albus has become highly invasive in areas around the world where it is not native, particularly the United Kingdom, creating dense thickets and displacing native species (Booy, Wade, & Roy, 2015). These traits have begun to allow S. albus to have similar effects on the protected Vancouver Island Garry oak ecosystems.
Future Trajectory
​With expansion of towns and cities on Vancouver Island, Garry oak ecosystems are continuously under threat. Fragmentation of land leads to less connectivity between sites, reducing genetic transfer of endangered species. Disturbance sites allow colonization by aggressive IASs as well as vigorous native species that both outcompete Garry oak associations. A changing climate will produce environmental variations that could lead to great success of invasive species (Government of British Columbia, 2016). It is predicted that growing seasons will be longer, there will be shifts in infectious diseases and pests, droughts will be more frequent, and sea levels will rise (Government of British Columbia, 2016). Continued management of the Garry oak ecosystem is essential for their survival but possible revaluation of management goals may be necessary. Historic restoration targets will be extremely difficult to attain and maintain with a changing climate and consistent human pressures. A possible method is to acknowledge the potential value of hybrid and novel ecosystems, with adaptable species that will inhibit invasive species growth, maintaining a shade-limited meadow structure (Hobbs et al., 2014).
As the climate changes on Vancouver Island, the success of S. albus can be anticipated to increase. In Europe where S. albus is an IAS, the species is stunted by extreme drought but flourishes with full sunlight on relatively moist, well drained and fertile soils (Gilbert, 1995).  S. albus is extremely adaptable to habitats, which allows it to establish in most areas in both native and non-native ranges, spreading gregariously and relatively quickly (“Common Snowberry, Symphoricarpos albus,” 2017; Gilbert, 1995). Warming winters on Vancouver Island indicate that seed viability will increase, and high seed productivity will lead to greater numbers of established S. albus (“GOERT 2019). Additionally, S. albus is relatively fire resistant and has tolerance to residual herbicides (Gilbert, 1995). All of these factors may lead to a greater expansion of S. albus throughout Vancouver Island and within Garry oak ecosystems, indicating that proper management strategies must be developed quickly. This is especially important as conditions intensify for the "at risk" Garry oak ecosystem associates.
​​One concern when addressing management of a native species is its potential cultural significance. S. albus has been used by the Coast Salish First Peoples throughout their history (Turner, 2014). The berries have been used traditionally for their saponin properties as shampoo, and as an antiperspirant (Turner, 2014). Crushed berries can treat sores, rashes, burns, eye infections and warts (Turner, 2014). Root and twig teas have been used to treat stomach problems, fevers, bedwetting and tuberculosis (Turner, 2014).   Structurally, branches were used to make brooms and arrows were made from shoots (“Common Snowberry, Symphoricarpos albus,” 2017). Additionally, S. albus was incorporated into stories and lore. The “berries [were] associated with snakes and with corpses and ghosts (widespread [in the Salish First Peoples]); said to be the Saskatoon berries of the people in the land of the dead (Stl’atl’imx [First Peoples])” (Turner, 2014). The traditionally importance of this species for Coast Salish First Peoples must be considered when combatting management strategies. Additionally, the Coast Salish First Peoples have a wealth of knowledge on the management of S. albus, having maintained the species historically in the Garry oak ecosystems. 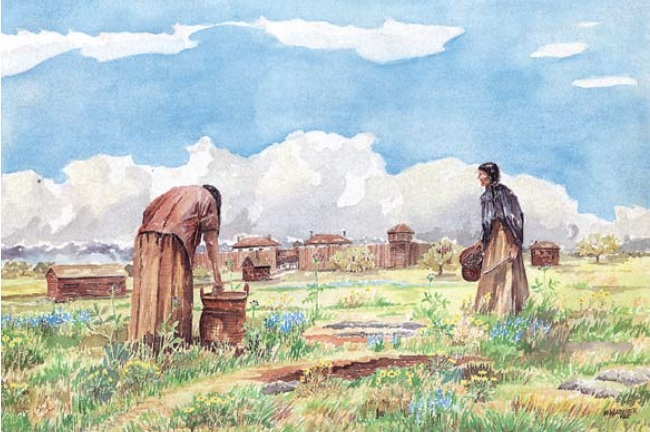 ​
​Future research should include surveillance of emerging ecosystems while protecting species at risk. Involvement with the Coast Salish First People is essential for respecting their traditions and culture. Additionally traditional ecological knowledge of the sites and the historic adaptations of the endangered species are fundamental when creating a management plan. By creating a complete picture of the land, good decisions can be made on how to handle native species that currently pose threats on the Garry oak ecosystems, hopefully leading to greater resilience for this threatened ecosystem.