ECOLOGICAL GENEALOGY
An estimated 30 to 70 million bison once roamed across North America, including relatively small populations of plains bison in the mountain valleys in what is now Banff National Park (BNP).
​
As the 20th century neared, this keystone species had been driven close to extinction across the continent, and were entirely removed from the area that is now Banff, where they had roamed for over 6000 years (Parks Canada, 2017; Hinterland… n.d). The reintroduction of the plains bison to BNP in February of 2017 manifests a turning of the tide for this ecological and cultural keystone species. Despite Park’s Canada’s past colonial practices and the cultural genocide brought upon Canada’s Indigenous peoples by the Canadian government, the reintroduction of bison represents the promise of ecological vitality and reconciliation with First Nations.​

​The bison is a grazing herd animal. Populations often consist of multiple bulls, in addition to a mixture of cows, calves, yearlings, and subadults. Historically, herds are known to have roamed hundreds of kilometers to follow the seasonal availability of a number of preferred forage plants (Hinterland… n.d; Species at…, 2018). Bison are well adapted to winter, preparing by storing fat and growing out their characteristic thick fur coats in the fall. Bison search for food in snowy conditions by swaying their heads back and forth to reveal grasses beneath the snow (Hinterland… n.d).
​
​Several First Nations--Ktunaxa (Kutenai), Cree, Niitsitapiksi (Blackfoot), and primarily the Stoney Nakoda Sioux nation, consisting of the Bearspaw, Wesley, and Chiniki bands-- interacted in varying degrees with the ecosystem processes of what is now BNP and with the bison that once resided there (Binnema et al, 2006; Stoney Nakoda…, 2012). The exclusion of Indigenous peoples from the area since the Park’s designation  resulted in few accessible westernized sources regarding traditional ecological and cultural practices. The Stoney Nakoda traditionally utilized the Banff area for hunting, ceremonial or celebratory purposes, and medicinal gathering, and many Stoney place names and medicinal knowledge have remained with their people despite a long exclusion from their sacred areas (Stoney Nakoda…, 2012). The targeted eradication of the bison by colonial forces in combination with other means of the Canadian governments resulted in cultural genocide against Indigenous nations. The federal government was able to organize Treaty 7 and remove the Stoney Nakoda as well as the Blackfoot, Peigan, Blood, and Tsuu T’ina from their lands, including the area that became BNP (The Truth…, 2015; CBC, 2001; Binnema et al, 2006). Until 1902 when the park was expanded to border their reserve and envelope the majority of their hunting grounds and main trail, the Stoney Nakoda continued to hunt on both the eastern and western slopes of the Rocky Mountains (Binnema et al, 2006). Some well-known uses of the bison include food, hides used for tipi walls, shoes and clothing, and bones used for making tools. Indigenous land use involved the intentional burning of forests and meadows, which improved habitat quality for many animals including the bison by preventing the expansion of forests and encouraging the growth of the bison’s preferred grass species (Parks Canada, 2017; Alberta Wilderness…, n.d; Feir et al, 2017).​ 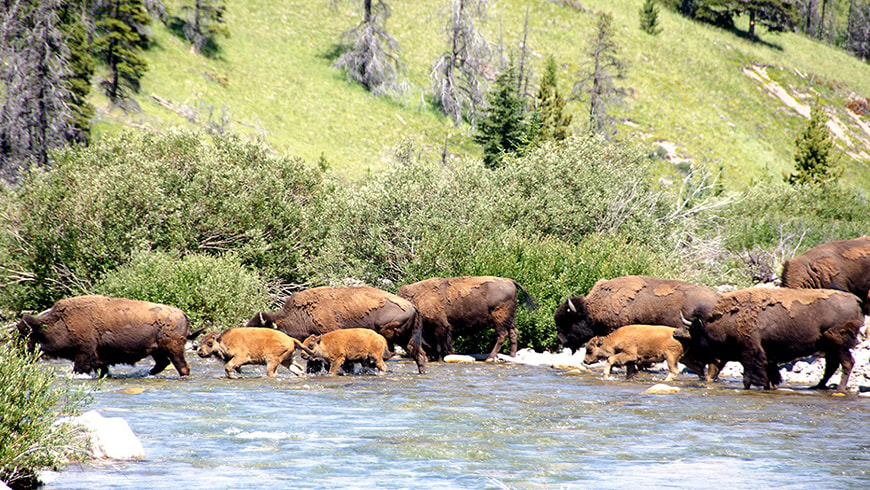 ​Banff National Park was once subject to plentiful herds of large grazing bison that roamed, feeding on grasses and small plants. Since their extirpation, the removal of the bison’s engineering actions resulted in major changes to their ecosystems. Small herbaceous shrubs and trees began to encroach on meadows that would have historically remained open under the management of bison. In stark contrast to their historical ranges, the bison now occupy approximately 0.5% of the ecosystems they once shaped (Steenweg et al, 2016).
PRESENT CONDITIONS
​Alberta’s current Wildlife Act was amended in 2018 which resulted in a safety buffer zone for the Banff bison population; the Upper Red Deer River Special Bison Area. This buffer zone encompasses a total area of 239 square kilometers (Derworiz, 2018). The Wildlife Act amendment means that bison are now considered wildlife in the Special Bison Area, despite being considered livestock in the rest of the province (Alberta Wilderness Association, 2017-2018). This special buffer zone was created to protect the bison if they wander outside of the park and into any adjacent public land.
strengthen the bison rewilding effort, while re-establishing the cultural practices of Indigenous nations once reliant on the bison. Actions are being taken presently in respect of the relationship between the Stoney Nakoda nation and the BNP landscape, including the creation of a BNP pass specifically for the Stoney Nakoda people. This exclusive park pass is valid for a lifetime, allowing holders to access the park free of charge, facilitating landscape based cultural practices (Rocky Mountain Outlook, 2018).​​
FUTURE TRAJECTORY
​The bison is an allogenic ecosystem engineer which will have major impacts on the trajectory of the environment and the habitat heterogeneity of a landscape (Knapp et al, 1999). Ecosystem engineers play a vital role in conservation and species diversity. As discussed, the grazing habits of the bison greatly influence plant community assemblages, resulting in a cascade of effects on other consumer species (Nickell et al, 2018). Presence of bison will serve to provide opportunities for new plant growth, diversify habitat composition, increase interspecies competition, and prevent ecosystem homogenization by hyper abundant species (Nickell et al, 2018). Vegetation will become healthier, fertilized by bison waste, benefitting other ungulates like elk and deer as seen in the Konza Prairies, United States (Knapp et al, 1999). More ideal habitat for birds and small mammals will be created by increased grazing meadows in forest ecosystems. Bison will offer a food source for predators, scavengers and detritivores, and old wallows will turn to ephemeral pools for amphibians (Laundré et al, 2001; Gerlanc et al, 2003). The physical environment will also be modified by bison as they disturb the soil when moving, and wallowing in the dirt to shed fur, remove fleas and spread sent in the mating season (Nickell et al, 2018). This behaviour can have some impressive unseen benefits, including the creation of unique disturbance sites which contain specific biological and physical attributes. Wallows have varying assemblages of arthropods, depending on the age and abandonment of the site; overall, wallowing sites play a vital role in arthropod diversity and abundance in ecosystems, which is important when considering consumers in higher trophic levels (Nickell et al, 2018). 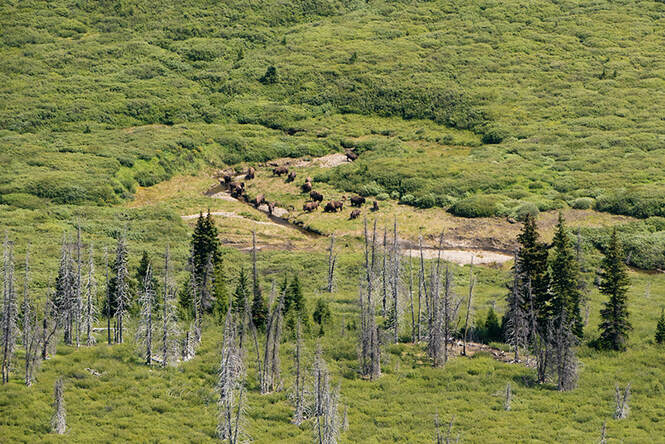 ​In the future, if bison continue to flourish in the Banff region, it is predicted that the ecosystem will return to past trajectories containing healthy meadows and grassland systems. Assemblages of plants and animals will be in balance from the positive effects subjected by bison activity. Wallows, excrement, and bison movement will stir up the soil improving nutrient cycling and biodiversity. Though it’s also possible that the bison herd could be wiped out as the population is still fairly small and fragile. Upon extreme predation, disease outbreak or possible natural disasters such as landslides. If the reintroduced herd is to continue thriving into the future, the population must reach a stable self sustaining number immune to fluke occurrences and extreme pressures.

The Truth and Reconciliation Commission of Canada. (2015). Honouring the truth, reconciling for the future. Retrieved from http://publications.gc.ca/collections/collection_2015/trc/IR4-7-2015-eng.pdf

Feir, D., Gillezeau, R., & Jones, M. (2017). The slaughter of the bison and reversal of fortunes on the great plains. University of Victoria Economics [Department Discussion Paper]. Retrieved from https://www.uvic.ca/socialsciences/economics/assets/docs/discussion/DDP1701.pdf

Hubbard, T. (2009). “The buffaloes are gone” or “return of the buffalo”?- The relationship of the buffalo to Indigenous creative expression. The Canadian Journal of Native Studies, 29(1), 65-85. Retrieved from https://search-proquest com.ezproxy.library.uvic.ca/docview/218084208?accountid=14846&pq-origsite=summon